International Day of Yoga 2022: Benefits of Yoga for Pregnant and Lactating Mothers 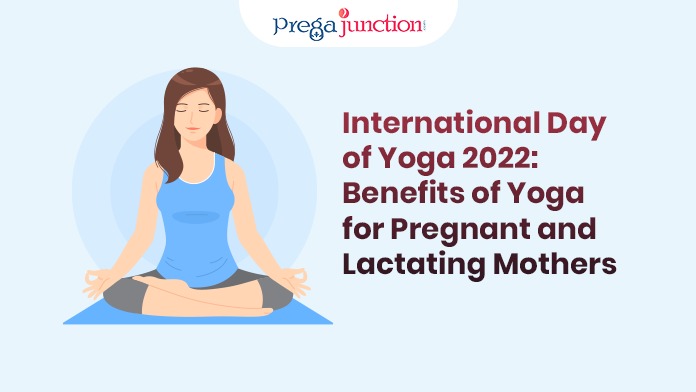 Yoga is a universal form of exercise that enables you to augment your physical and mental well-being. Since pregnancy is such a delicate and sensitive time, every decision should be taken with optimal care.

The International Day of Yoga 2022 is on June 21, 2022, and is a fantastic opportunity to integrate this exercise into one’s daily routine. If you are worried about the safety precautions with yoga, this article will explore the benefits of yoga for pregnant women in detail.

The International Day of Yoga in 2022 will be celebrated on June 21, 2022. In India, the Union Ministry of Ayush has reported “Yoga for Humanity” as the theme of this year’s celebration theme. Prime Minister Narendra Modi announced the same.

The day is specifically designated to celebrate yoga’s “physical and spiritual” power. The incidence of yoga dates back to 5000 years ago in India. With its popularization globally, it isn’t surprising that this rejuvenating art form deserved a day to itself.

The International Day of Yoga idea was first proposed on September 27, 2014, by Indian Prime Minister Narendra Modi during his speech at the UN General Assembly. Later, June 21 was decided as the final day for celebrating yoga after it received the coalition and support from over 177 countries in the assembly.

Since then, June 21 has been celebrated as the International Day of Yoga.

How does Yoga Benefit Pregnant and Lactating Women?

Exercise during pregnancy is often a touchy subject. While some women are advised to stay active throughout their term, some are advised to avoid any strenuous activity due to high risks. Yoga is one of the safest forms of physical exercise that interconnects the mind, body and soul.

Most pregnant women who practice yoga under professional supervision report that it alleviates the stress and strain on their bodies.

Let us further explore the benefits of yoga in pregnancy and post-partum:

1. Supports the Changes in the Body

Pregnancy is a highly challenging period in a woman’s life. With the joy of welcoming a new life on Earth comes the tiring progress of a woman’s changing body. Doctors suggest that the body undergoes an accelerated amount of change during pregnancy.

Prenatal yoga supports those changes and helps a woman tide over the ongoing complications that they are experiencing. It relieves muscle strain, alleviates lower back pain and improves overall flexibility, crucial to a healthy pregnancy experience.

You must have heard pregnant women saying, “My muscles are constantly stiff and hurting.” This is a prevalent consequence of pregnancy, one that every pregnant woman experience to some extent throughout their term.

Prenatal yoga alleviates this complication. Not only does it reduce the muscle stiffness, swelling and pain, yoga tones certain muscle groups around the abdomen and pelvic floor to prepare the woman’s body for the upcoming birthing process.

Indulging in yoga for muscle toning also reduces the risks of pain and discomfort that most women experience throughout the nine months of pregnancy.

3. Prepares the Body for Childbirth

Delivering a baby involves a lot of physical and mental presence. It is an intensive procedure that often invokes fear and uncertainty in women’s minds. However, the constant fear-tension cycle leading to childbirth makes the process tougher and complicated.

Different yoga poses and methods, including stretching, muscle toning and deep breathing exercises, help the body relax and loosen up as the delivery date nears. A woman’s body instinctively knows what to do during childbirth. However, the ingrained fear can make the procedure complicated. Yoga helps relax and mentally strengthen a pregnant woman for the childbirth process.

Experiencing back pain, stress, headaches, shortness of breath and a plethora of other pregnancy symptoms? If yes, yoga can rightfully alleviate these symptoms.

Not just the physical symptoms, studies have found that doing yoga during pregnancy can effectively support women experiencing depressive symptoms throughout their pregnancy. However, don’t regard yoga as a miracle worker because that’s not what it is. Yoga can alleviate these complications to an extent.

If you are experiencing deteriorating physical and emotional health throughout pregnancy, we’d highly recommend seeking medical help for the same.

5. Develops Connection with the Growing Baby

Pregnancy often encourages mothers to build a stronger bond with their growing baby. Taking a few minutes out of the day for yoga supports that mentality. It gives you an uninterrupted, one-on-one time with your baby to relax and unwind after a harsh day at work.

The more you relax, the better it is for the baby to grow in a safe and healthy environment inside your womb.

Breastfeeding mothers are often hunched over trying to accommodate the needs of their newborn children. Being in uncomfortable positions for prolonged periods leads to stiffness, pain and lack of flexibility in the back.

Yoga relieves the strain and alleviates the pain and stiffness that most nursing mothers complain about. Different yoga poses reduce back pain and correct the misalignment of poor posture during breastfeeding.

Breastfeeding is a mentally exhausting journey for several women. Some struggle with mom guilt, while a few others struggle with post-partum depression or anxiety.

Yoga addresses these concerns post-partum. Not just physical health mental health of a new mother is equally important. Battling sleep deprivation and stress throughout post-partum eventually catches up to the overall emotional state of a new mother.

Deep breathing exercises and mindful yoga poses provide new mothers with the much-needed break and relaxation they need to rejuvenate and power up after a tiring day. Besides that, practicing yoga also cultivates patience, which is crucial for a nursing mother.

Is it safe to do yoga while pregnant?

Modified or moderate level of yoga under professional supervision is considered safe during pregnancy. However, we’d highly recommend discussing the pros and cons with your OBGYN before you start it.

Yes, although the International Day of Yoga was proposed by the Indian government, it is celebrated globally.

How often should I practice yoga during pregnancy?

The safety measures and frequency of yoga practice during pregnancy are all dependent on your doctor’s advise. It is ideal to have an open discussion with your doctor and assert what’s suitable for your pregnancy term.

International Day of Yoga is a reminder of how rewarding practicing yoga is. But are the benefits of yoga during pregnancy a fact or myth? Surprisingly enough, yoga during pregnancy and post-partum is considerably safe. The only thing you need to ensure is to discuss all your options and safety measures with your OBGYN before getting started with this relaxing art of healing.