Papaya During Pregnancy: Is It Good to Eat, Nutrition Facts, Ripe v/s. Unripe Thanks to the media and the villainous portrayal of papaya during pregnancy, people are often skeptical of consuming this fruit during pregnancy. Is papaya safe during pregnancy? Will it result in complications? The questions are never-ending, and the answer is way simpler than you think.

Papaya, like most other fruits, is safe to eat during pregnancy. But, in moderation. There are certain restrictions regarding the relationship between papaya and pregnancy. While ripe papayas are safe, an unripe papaya is a no-go.

With all the lingering confusion surrounding papaya and pregnancy, let us sit down and clarify everything associated with the subject.

Papaya and Different Stages of Pregnancy 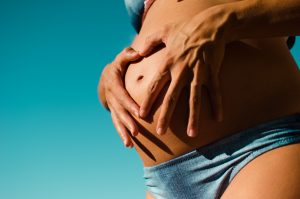 Papaya consumption during pregnancy sparks a lot of dilemmas and controversies. While some believe it’s safe, some people are skeptical about its benefits.

Ripe, bright yellow-colored papaya is safe for consumption during pregnancy. It is those bright green unripe papayas that cause complications. Let us walk you through the impacts of papaya during each stage of pregnancy.

Things are very new and delicate when you are in your early stages of pregnancy, preferably during the first trimester. The fetus is still at a primitive stage, needing support and care for optimal growth and development.

Even the slightest imbalance in hormonal levels or increase in harmful substances can be fatal. This is why most doctors and even elders in the family suggest avoiding papaya altogether, even the ripe ones.

Unripe papaya contains a harmful compound called latex, which inflicts uterine contractions in a woman. The levels of papain in the papaya mimic the functions of prostaglandins and oxytocin, both of which are at their peak during labor and delivery. Even the slightest heightened levels of papain in the bloodstream during early pregnancy can result in miscarriage or other pregnancy complications.

While unripe papaya is an absolute no during early pregnancy, its consumption is often encouraged during later pregnancy stages, especially to induce labor. The papain enzyme contributes to the uterine contractions, preparing the mother for the delivery.

However, even during the third trimester, the consumption of unripe papaya should be done under the doctor’s supervision because excess levels can contribute to internal bleeding and hemorrhage.

Before proceeding further, let us highlight some of the nutritional facts about papaya.

Papayas are a storehouse of nutrients and are low in calories, making them a perfect snacking fruit. Here’s a quick breakdown of the nutrients per serving:

Besides that, Papaya is also enriched with a range of vitamins and minerals, including:

The steady vitamin supply from papaya is also related to improved immunity, and it addresses the deficiencies in the body.

Does Papaya have Benefits during Pregnancy? 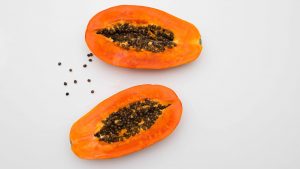 Following are a few of the common benefits:

Enriched with vitamins and minerals

As stated in the nutritional facts, ripe papayas are full of vitamins and minerals. Besides the staple Vitamins A, B and C, papayas contain high levels of potassium and beta-carotene, both of which are antioxidants. It reduces the risks of oxidative stress in the body and improves overall health.

The high vitamin levels also optimize immunity and prevent risks of infections in the body during pregnancy.

Ripe papaya has a high level of water-soluble dietary fiber in it. This proves beneficial for pregnant women struggling with digestive disorders or constipation during gestation.

When discussing prenatal care and vitamins, folic acid is an absolute must. Papaya has a considerable amount of folic acid, which prevents neural deficits and developmental issues in the growing fetus.

Eating an optimal amount of papaya, as instructed by the OBGYN, can improve milk production in breastfeeding mothers after childbirth.

Why is Unripe Papaya not safe for Pregnancy? 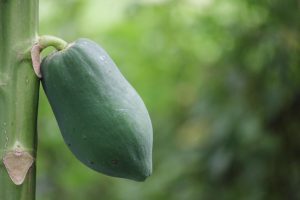 The yellow-skinned ripe papaya is healthy for consumption during pregnancy but in moderation. So, why is the green-skinned unripe papaya not safe?

Unripe papaya contains a milky-white compound called latex, which can cause early uterine contractions during pregnancy, leading to risks of miscarriage or other complications.

The findings correlate to a pre-clinical trial done on a rat womb tissue. In the study, the administration of the latex from the unripe papaya led to heightened production of prostaglandin and oxytocin, which are directly responsible for causing uterine contractions.

If the same happens in an actual pregnant woman, these spasmodic contractions of the uterus can lead to early labor and miscarriage.

What are the other Negative effects of Papaya during pregnancy?

Besides inducing early labor and increasing chances of miscarriage, papaya can also lead to other complications in a pregnant woman. Some include:

Besides latex, other enzymes like pepsin and papain, which are present in unripe papaya, can delay the steady development of the fetus. Studies highlight the correlation between consumption of unripe papaya and implantation disorders.

Papain also inhibits optimal cell growth in the developing fetus. This is mainly because papain is a powerful proteolytic enzyme. It affects the fetus’ tissue development too.

Excessive papaya consumption, especially the unripe papaya, is associated with placental bleeding. It can lead to heightened blood pressure, which causes abruption and other pregnancy complications.

Papaya has high levels of dietary fiber, which improves and increases gut motility in pregnant women. While it is beneficial for constipated women, the excess bowel movement puts pressure on the GI tract and uterus, leading to further complications.

The leaves and seeds of papaya are an absolute no during pregnancy. They contain an active toxin called carpaine, which impairs the central nervous system.

Whether or not papaya is a safe food during pregnancy is still a question for several people. Ideally, the ripe papayas are safe but when eaten in moderation. Similarly, unripe papayas are linked with pregnancy-related complications, making them a complete NO during pregnancy. If you have any questions or worries surrounding accidental eating of such fruits or vegetables, it is always better to consult your OBGYN for further guidance.