Seed Cycling for Fertility: What is It, Does It Help in Balancing the Hormones? 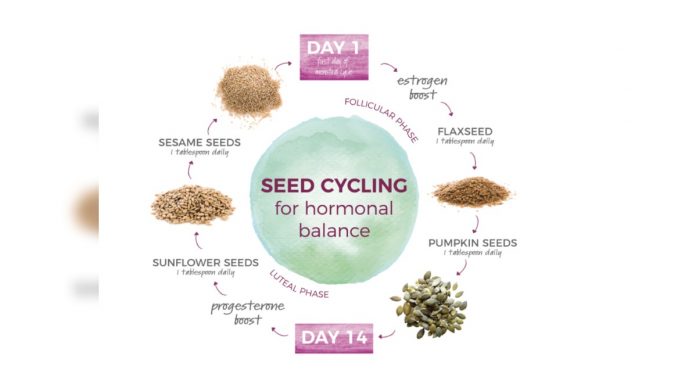 We had to lay down the figures to emphasize how gravely hormonal imbalance is tied to a woman’s fertility (sometimes, even for men).

Seed cycle is a trending treatment type that helps manage hormonal imbalance, premenstrual syndrome, and even the wary symptoms in menopausal women. So, what exactly is seed cycling for fertility? Does it regulate hormonal imbalance? This article shall walk you through all those basics.

Also Read: Unexplained Infertility: Do You Really Need an IVF or IUI?

What is Seed Cycling?

Seed cycling is a prevalent holistic and naturopathic mode of treatment for regulating hormonal imbalance in a woman’s body. The claims from this remedy suggest that it works by targeting two primary reproductive hormones in the bloodstream – estrogen and progesterone.

Proper methods promote regulation of the estrogen levels in the first half of the menstrual cycle while the second half focuses on progesterone.

Also Read: Menstruation problems: Causes, Treatment, and When to see a doctor

What Happens During Seed Cycling?

Typically, it involves consuming a mix of seeds during the first two and last two weeks of the menstrual cycle. Keep in mind that the impacts of seed cycling aren’t limited to promoting fertility. Since this manages and regulates hormonal imbalance, it is ideal for menopausal women.

Here is a quick breakdown:

Seed cycling is a naturopathic remedy that takes a few months to show results. You can’t expect results to show after a week or a few days of seed cycling. Naturopathic experts suggest waiting a few months before seeing the rightful results.

Since seed cycling is a naturopathic remedy, it isn’t surprising that its scientific approaches are inconclusive. Some studies support this remedy; however, there need to be more conclusive studies to assert its impact on a woman’s fertility.

Seed cycling asserts the regulation of hormones in the female body using phytoestrogens and lignans present in the seeds. The mode of action is pretty straightforward and backed by science due to its overall impact in regulating one’s fertility.

Ideally, it is the lignans in the seeds that show significant benefits.

The lignans from the sesame seeds and flax seeds, after consumption, are converted to mammalian lignans of two formats – enterolactone and enterodiol. These phytoestrogens have similar functions and modes of action to the estrogen produced in the female body.

Studies have even found a correlation between flax seeds and regulated menstrual cycles in women. However, since several studies supporting seed cycling are inconclusive, reaching a 100% guarantee is difficult.

A handful of studies have found promising benefits of seed cycling with cancer prevention instead of hormonal regulation. Seed cycling is more of a support remedy and not the primary mode of treatment for hormonal imbalance, as fertility specialists suggest.

Seeds and nuts have a range of healthy fats and nutritional benefits that curtail many negative impacts on the body.

However, the sole reliance on seed cycling for fertility isn’t ideal, primarily because of its limitations. The scientific evidence to support the positive impacts of seed cycling on fertility is weak. That doesn’t mean it is entirely void. Several fertility specialists suggest including seeds and nuts in one’s diet to improve overall well-being. However, it is a form of accessory support and not the primary treatment option, as we mentioned.

Previous articlePCOS in Lean and Obese Females: Nutritional Strategies to Treat Polycystic Ovarian Syndrome in Women
Next articlePCOS and Insulin Resistance: What is the Relationship?